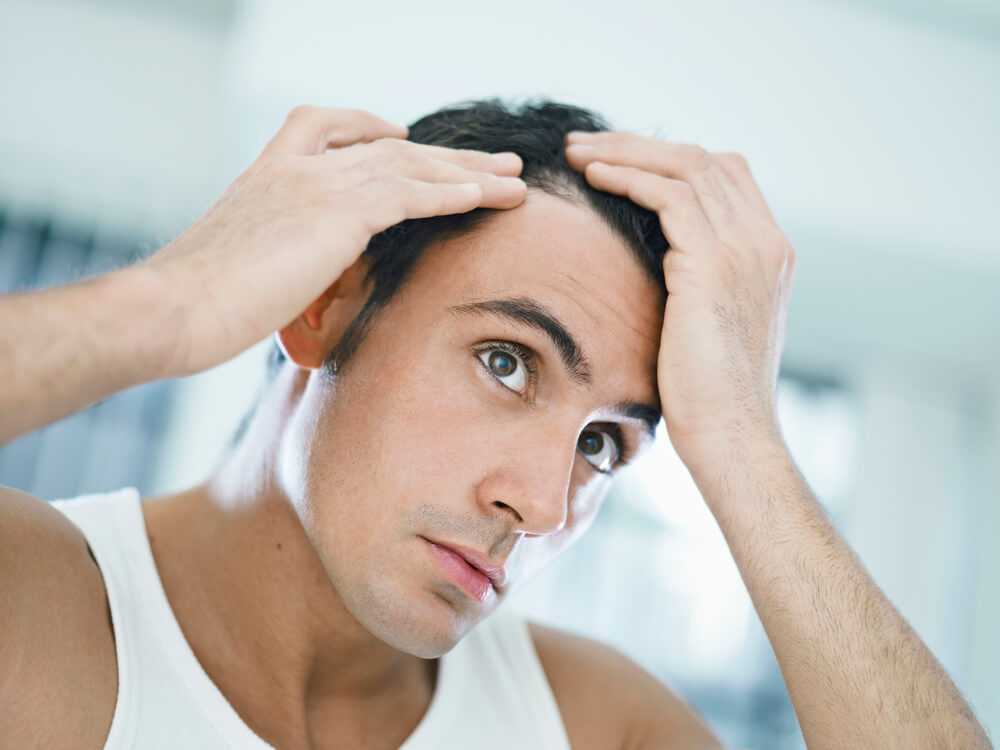 A receding hairline is a fear for many men.

This is because a hairline with a noticeable recession is often just the first stages of pattern hair loss.

If you don’t treat the problem as soon as it starts, then you may be in a difficult position when it comes to stopping hair loss and regrowing your hair.

With all of this in mind, it makes sense that you’d want to take immediate action. That’s what this guide is for.

In this article, you’ll learn about the causes of hairline recession and the reason that hair loss often happens in a pattern.

Next, you’ll learn how to tell the difference between a maturing hairline and a receding hairline. This will help you to determine your current hair loss situation.

And finally, you’ll learn the various ways you can stop your receding hairline from progressing. In some cases, you may even be able to restore your hairline to its previous glory.

Now let’s get to the good stuff.

What is Hairline Recession?

To start, let’s define what a “hairline” is.

In short, a hairline is a line of hair follicles that runs along the forehead and the temples. This area is also known as the temporofrontal region.

The hairline has shape and placement which is largely determined by genetics.

There are different types of hairlines, though, and you’re likely to experience at least two of them as you go through life.

The hairline types include juvenile, mature, and receding.

We’ll talk more about the differences between these later. But the improtant takeaway from this session is this:

Hairline recession is the movement of the hairline further and further back on the scalp.

The actual follicles do not move. But as the follicles mature or become damaged, they can stop producing hairs which leads to the appearance of a recession.

What Causes a Receding Hairline?

You know what a receding hairline is, but what causes it?

There are many factors that may contribute to hairline recession. These include aging, injury, infection, or illness.

The most common cause of a receding hairline, however, is Androgenetic Alopecia (AGA).

But what’s the cause of AGA?

The truth is there isn’t a clear answer to this question. There are many theories, though.

Perhaps the most well-known theory on the cause of AGA is the DHT Theory of Hair Loss (1).

This theory posits that AGA is triggered by follicular sensitivity to the androgen hormone DHT. As the androgen attaches to the follicles (as it normally does), it triggers inflammation and miniaturization. This then leads to thinning and pattern baldness.

This theory does leave many questions unanswered. For example, why (2):

Unfortunately, the DHT theory cannot answer these questions. But another theory growing in popularity can.

According to the Scalp Tension Theory of Hair Loss, the progression of AGA is triggered by scalp tension “mediated by pubertal and post-pubertal skull bone growth and/or the overdevelopment and chronic contraction of muscles connected to the GA (2).”

When the scalp becomes tense, it leads to inflammation and blood flow restriction.

If that wasn’t enough, the Scalp Tension Theory also explains why AGA progresses in the pattern that it does.

The scalp is made of five layers which consist of skin, subcutaneous, galea, subgalea, and pericranium.

The galea layer is what connects the skin to the muscles, and so when tension occurs it leads to tightening of the skin which causes damage to the hair follicles.

This is when you’ll begin to see the M-shaped pattern of hair loss that’s so commonly associated with MPB.

Receding Hairline Versus Mature Hairline: How to Tell the Difference

Before we go any further, it’s important that we clearly distinguish between a receding hairline and a maturing hairline.

As you go through your teens and early adulthood, it’s common for the hairline to slightly recede. This is known as hairline maturation, and it’s the process that changes the male hairline from a juvenile one to a mature one.

For men without AGA, the recession will stop at its natural point.

But for those men with AGA, the recession will continue until the temples are noticeable thinned and receded.

The thinning will soon be obvious throughout the scalp, especially on the forehead and vertex.

If you don’t treat the problem, you’ll continue to progress through the stages of the Norwood classification scale until you’re completely (or almost so) bald:

If you’re at a point where your hairline recession has continued beyond maturation, then it’s time to begin treatment.

Remember that the earlier you start, the more successful you’re likely to be.

If you’re serious about stopping your hairline recession, and possibly even regrowing your hair, then take a look at these suggestions.

1. Use a Scalp Tension Reduction Device

There are plenty of medications and hair loss treatments which target DHT. But if scalp tension is the actual cause, then these aren’t likely to do much in the long run.

The good news is there are many devices available which aim to reduce scalp tension gradually. Let’s take a look at a few of them.

A scalp massager is a simple device that works to gently relieve tension while also increasing blood flow and breaking down fibrosis (4, 5).

The tool is similar in appearance to an unraveled egg beater. It’s often made of metal rods, and these may contain plastic balls at the end to prevent scratches and tangling.

A scalp massager is easy to use — just place on top of the vertex, gently press down, and the rods will spread out around the scalp — and the exercises can be performed in just 10 minutes per day.

If you’re looking for a tool a step above the scalp massager, the dermaroller/dermastamp is a good one to consider.

The dermaroller is a wooden or plastic cylindrical drum attached to a handle. The drum contains dozens to hundreds of needles.

When the dermaroller is rolled over the scalp, the needles pierce the skin. This then triggers the wound healing process which includes inflammation, proliferation of stem cells (to close the wound), and remodeling of the area.

This may seem like a far-fetched way to relieve scalp tension and stop hairline recession.

But there’s actually scientific evidence to suggest that this process can lead to the regeneration of hair follicles (6).

And just like scalp massage, this process also increases blood flow to the hair follicles and breaks down fibrosis.

The growband is a device that might be considered the holy grail of scalp tension reduction.

So, what is this device?

The growband is a cap that sits upon the head. At the sides of the cap are inner tubes which can be inflated so as to promote pressure. 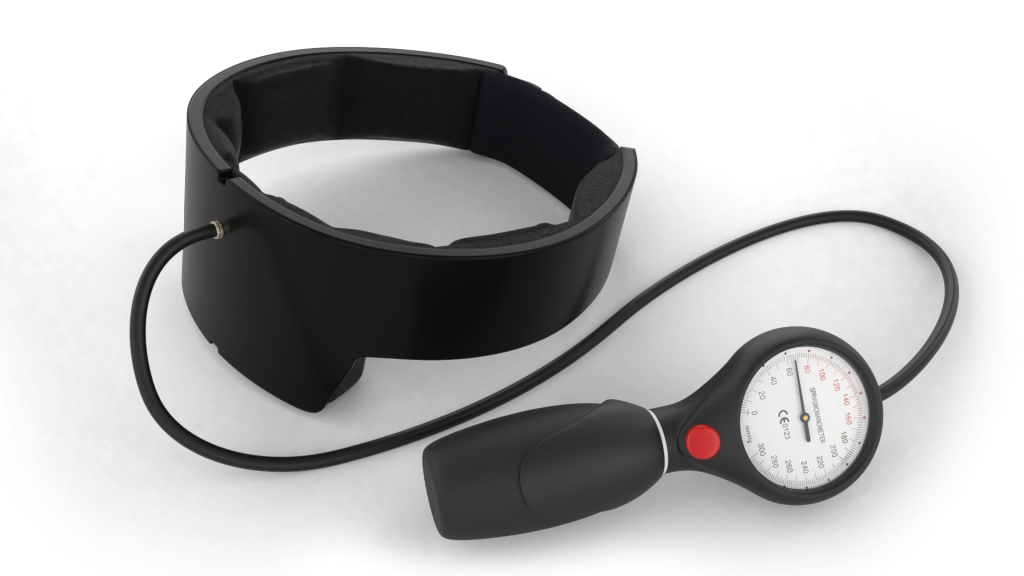 As the pressure builds, the growband gently lifts the scalp up and away from the muscles. This helps to reinstate blood flow to the area which is necessary for oxygen and nutrient delivery.

The majority of scalp tension is mechanical, which means it happens physically. There is, however, evidence to suggest that mental stress can contribute to mechanical stress, too (7).

Fortunately, there are many exercises you can do at home to help relieve stress.

When you’re particularly stressed out or tired, you may take a deep breath to give yourself a chance to relax. This is your body’s way of reducing stress, and you can use it to your advantage in the fight against hair loss.

To clarify, there is a difference between deep breathing and meditation.

Deep breathing is a physical practice only. Meditation can incorporate deep breathing exercises, but it’s focused more on mindfulness and self awareness.

You can combine the two, or practice one or the other.

These practices are a great way to settle your mind and refocus. And best of all, they have been shown to contribute to stress reduction (8).

You can practice deep breathing and meditation anywhere, at anytime. It’s best to find a quiet, semi-secluded space for the duration of your session, though.

If you’d like to combine mindful breaths with gentle exercise, then yoga is for you.

Yoga as it’s practiced largely today is a group of postures that increase flexibility, promote mindfulness, and stimulate blood flow to different areas of the body.

It can also be done in conjunction with spiritual practices.

There’s also quite a bit of evidence to support yoga in the treatment of stress, anxiety, and depression (9).

And you don’t need to attend classes to begin.

There are plenty of websites and Youtube channels that teach basic poses to get you started.

Just take a look at Yoga Journal, for example, and you’ll be off to a solid start.

It’s true that scalp tension plays a major role in pattern balding. However, there are steps you can take while simultaneously working to reduce scalp tension that will contribute to health hair growth.

One of those steps is to eat a clean, nutrient-rich diet.

There are many diets that claim to be the healthiest. Atkins, keto, paleo, vegetarian/vegan, etc. are all popular, and for various reasons.

But which one is right for you?

The answer will depend. 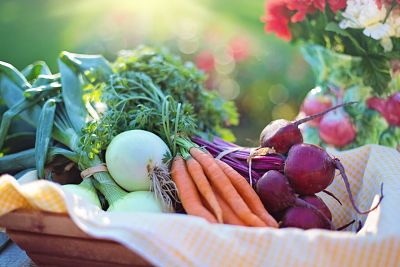 You also don’t need to follow an established diet plan to find success. You just need access to a wide selection of foods that contain a balance of fats, proteins, and carbs. These include:

A varied diet will ensure you’re receiving the essential vitamins and nutrients that your body — and hair follicles — need to thrive.

And with the increased blood flow as a result of the scalp tension-relieving methods above, your hair follicles will be sure to receive exactly what they need.

The good news is, a receding hairline is a noticeable enough sign of hair loss that you can begin to treat the issue quickly. This will prevent the progression of pattern baldness in many cases, or at least reduce its severity.

The secret is to treat the recession at its source, and this is scalp tension.

There are many devices and practices you can use to relieve scalp tension, and this makes it easier to treat hair loss from the very beginning.

Do you have questions about the information shared above? Do you have experiences with any of the tools or methods we recommended? Be sure to leave a comment below!