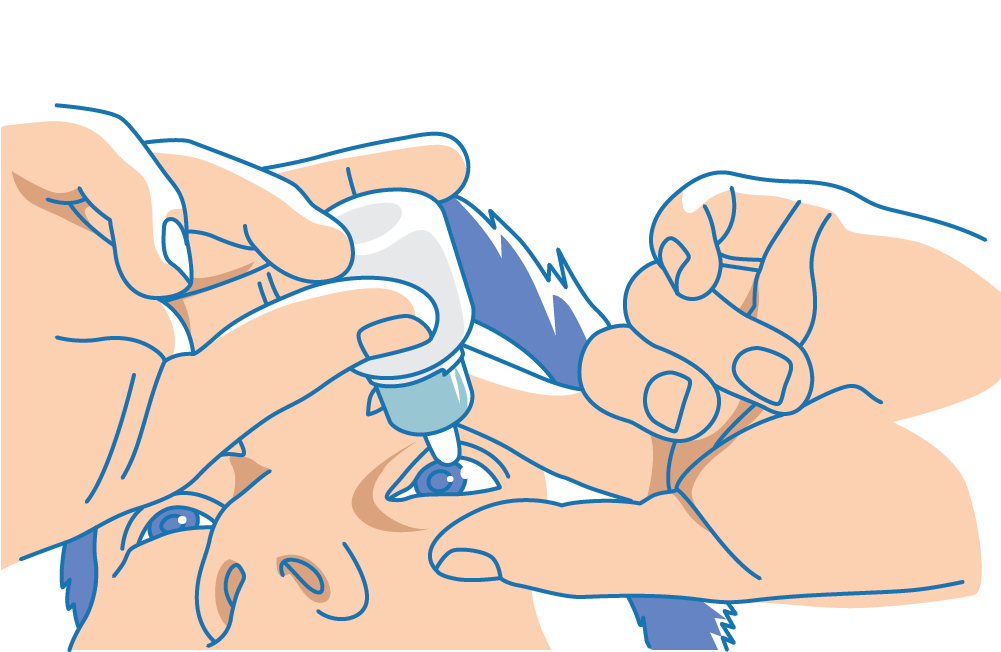 Hair loss is a devastating condition and one that is still vastly misunderstood. As such, there are many new drugs springing up that may offer a viable treatment option, even if the exact mechanism is unknown.

One such drug is latanoprost, which is currently used in the treatment of glaucoma and ocular hypertension (1).

In this post, the past and current research on the topic of latanoprost for hair growth will be discussed.

The process for drug approval will also be introduced, which may help to indicate when, if ever, latanoprost will be available on the market for the treatment of Androgenetic Alopecia (AGA).

Latanoprost, also known under the brand name of Xalatan, is a prescription medication used in the treatment of glaucoma (1). It can also be used in other conditions that increase pressure within the eye, such as ocular hypertension.

How Does It Work?

The drug is classified as a prostaglandin analog, and it works as an agonist (a chemical that activates a receptor to induce a biological response) at the prostaglandin F receptor (FP) (2, 3).

Prostaglandins have been shown to lower intraocular pressure, which is critical in the treatment of glaucoma (4).

They do this by increasing the permeability of the sclera, the white part of the eye connected to the cornea, to allow aqueous outflow (5). This reduces fluid buildup, and therefore lowers pressure.

While it’s currently only approved for use in glaucoma patients, researchers have found that latanoprost has an interesting side effect – hypertrichosis (8). That is, it promotes hair growth, sometimes excessively.

But does this mean it’s a viable treatment for balding and, if so, what are its odds of treating AGA successfully?

To answer these questions, numerous studies have been conducted over the years. These include initial trials of the drug’s hair-growth-promoting effects on macaque monkeys and, more recently, even human studies (9, 10).

Study: Effect of latanoprost on hair growth in the bald scalp of the stump-tailed macacque: a pilot study

The first study was small – consisting of just eight monkeys – but it shed light on latanoprost and its use in treating hair loss (9).

The monkeys were split into two groups, of which one received a daily topical application of 50 microg/ml of latanoprost for five months and the other received a placebo.

Two monkeys from each group were then given 500 microg/ml latanoprost daily for an additional three months. The results were tracked via monthly photographs and photo-trichographic analysis.

At the end of the study, the results were clear.

Fifty microg/ml latanoprost daily induced minimal hair growth, but the 500 microg/ml dose induced moderate to marked regrowth. According to researchers, there was a “5-10% conversion of vellus hairs to intermediary or terminal hairs.”

But how does this translate to treatment of AGA in humans?

Study: A randomized double-blind placebo-controlled pilot study to assess the efficacy of a 24-week topical treatment by latanoprost 0.1% on hair growth and pigmentation in healthy volunteers with androgenetic alopecia

In 2012, researchers recruited 16 men with mild AGA (Hamilton II-III) (10). For a total of 24 weeks, each of the men were given two treatments in different minizones of the scalp:

The topicals were applied daily and measurements including growth, density, diameter, pigmentation, and anagen/telogen ratio were tracked.

At the end of the 24-week study, the results showed that the latanoprost-treated zones saw increased hair density when compared to baseline and the placebo-treated zones

As researchers concluded, these results indicate that:

“Latanoprost could be useful in stimulating hair follicle activity and treating hair loss.”

NOTE: This study was performed on men with mild AGA, and the results may not be similar for more advanced stages of the condition. As such, further studies need be done.

When Will Latanoprost Be Available?

While latanoprost is current available by prescription for the treatment of glaucoma and similar conditions, it’s not yet FDA-approved for use in treating AGA (11). Will it ever be?

This question is nearly impossible to answer, as drugs must undergo various stages of rigorous testing before FDA approval. This process can take years and, many times, drugs fail to successfully complete the process for one reason or another.

Here’s just a brief run through of the process, and the various trial phases that the drug must go through to be approved (12):

As you can see, the FDA approval process is long and it requires many steps prior to the pharmaceutical company even applying for approval. This means that if manufacturers do want to see latanoprost approved for use in hair loss, it will be several years before that happens.

However, this assumes that the pharmaceutical company is interested in FDA approval, as well as whether the drug will pass the first few clinical trials.

Is There an Available Alternative?

There’s no doubt that current research on latanoprost in treating hair loss is promising. But are there currently available treatment options to exist?

The exact cause of AGA is still unknown, though researchers believe that multiple factors play a part (13). In particular, they are:

It makes sense, then, that many treatments (such as finasteride and dutasteride) aim to reduce DHT levels or at least make it possible for the follicles to thrive in a DHT-sensitive environment (such as minoxidil) (14, 15).

So, how effective are they?

Minoxidil was first introduced as an oral treatment for high blood pressure under the brand name Loniten (16). An unexpected side effect of the drug – hair growth on the scalp – was soon discovered, though, and the drug was then often prescribed by doctors to their patients with male pattern hair loss.

But researchers soon wondered whether a topical formulation could be made that would more effectively target the areas of hair loss – the scalp – so as to increase results. And that’s when the idea of Rogaine was born.

Ever since, multiple studies have shown the positive effects of hair growth in men with AGA.

An older study that was one of the first to look at the long-term effects of minoxidil on AGA was published in 1990 by researchers from Duke University (17). The study followed 31 men with AGA, all of who were treatment for between four-and-a-half and five years with 2 percent and 3 percent minoxidil formulations.

The rate of hair regrowth experienced by the men seemed to be peak at one year of treatment, and a slow decline in regrowth was noted over the subsequent years. However, maintenance of the non-vellus hairs was still evident.

As such, researchers determined that the drug was effective at long-term maintenance of non-vellus hairs in men with AGA. This is critical, as lack of treatment will lead to continued hair loss and the formation of the typical pattern of hair loss until baldness occurs.

The mechanism by which finasteride works is through inhibition of 5-alpha-reductase type II (19). This means it reduces the levels of DHT within the scalp and, as a result, reduces the inflammation and follicle miniaturization that is a hallmark of male-pattern hair loss.

But how much does it reduce DHT levels?

One study – which analyzed biopsies collected from the scalps of men with AGA being treated with finasteride – showed a reduction of between 60 and 75 percent (20).

And that’s not the only study to show the benefits of finasteride in men with AGA.

A one-of-a-kind study, published in 2002, compared the efficacy of finasteride when compared to a placebo treatment in nine pairs of twins (21).

One twin from each pair received a 1mg dose of finasteride daily for one year, while the other twin received a placebo. Hair growth was evaluated with the use of standardized clinical photographs, hair counts, and patient self-assessment questionnaires.

Serum DHT and testosterone levels were also measured throughout the study.

The results showed that the twins to receive the finasteride treatment saw an improvement in hair growth as evidenced by the clinical photographs and later supported by the hair count change.

These results are also supported by further studies carried out over the years, including one that showed the long-term (5-year) effects of finasteride in men with AGA (22).

But one non-drug alternative exists, and that is to increase blood flow to the scalp through mechanical means.

Blood flow is intricately linked with hair loss, as the inflammation that’s so common in AGA sufferers tends to cut off circulation to the follicle and ‘strangle’ the hair bulb (23).

In turn, this can lead to progressive hair loss as the follicles are unable to obtain oxygen and nutrients and even irreversible baldness.

The answer, then, is to increase blood flow to the scalp.

While minoxidil is believed to increase blood flow to the scalp through the opening of potassium channels, one other way to do so is with mechanical stimulation. This includes the use of a microneedling tool, such as a dermaroller or dermastamp.

Human studies that measure the effects of microneedling on hair growth have been carried out various times. One particular study, published in 2015, shows that it may even be useful in men who have failed to respond to conventional treatments (24).

Study: Response to Microneedling Treatment in Men with Androgenetic Alopecia Who Failed to Respond to Conventional Therapy

This study was small, as it consisted of only four men.

These men were using finasteride and 5% minoxidil solution for two to five years. And while their hair loss didn’t worsen, there were no signs of regrowth, either.

To determine whether microneedling could be a helpful addition to their current treatment regimen, they were subject to microneedling procedures for six months, and then followed up for 18 months to measure the sustainability of microneedling.

After eight to 10 sessions, all patients showed a response of +2 to +3 on standardized 7-point evaluation scale.

Even better, these results were sustained for up to 18 months after the last microneedling session.

There are many drugs on the market – including Rogaine, Propecia, and dutasteride – which have been shown to be useful in treating the underlying cause of androgenetic alopecia, and even reversing its effects (25). However, new drugs are being developed and discovered every day that can offer hope to sufferers of balding.

Is latanoprost one such drug? While initial trials seem promising, there is still much research that needs to be done.

But while you wait on these trials to be performed, you can make use of one of the other alternatives currently available on the market, including minoxidil (Rogaine) and finasteride (Propecia), and even combine them with mechanical hair growth stimulation techniques such as microneedling.