Green Tea and Hair Loss: Everything You Need to Know 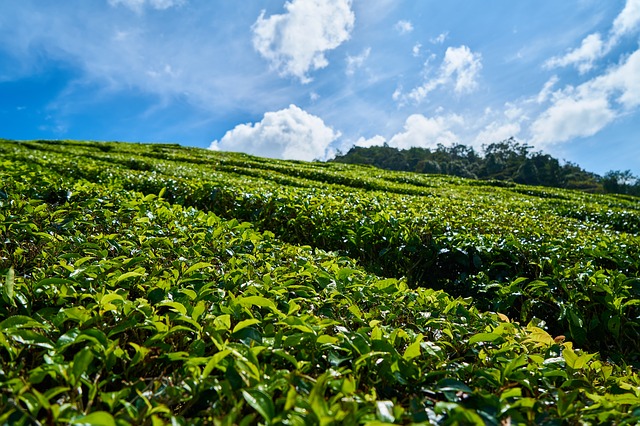 Have you heard that green tea can prevent hair loss and are curious to find out how?

Sadly, it’s not as simple as drinking a few cups a day, but researchers have shown how products based on green tea extracts have the potential to stop hair loss and even promote regrowth.

It turns out there are compounds in green tea with the ability to stop the process of hair loss spiralling out of control. This may be good news if you’re looking for an alternative treatment to prescribed drugs, but a quick health warning – just because green tea is a natural product, it doesn’t mean it can’t be dangerous if not taken correctly. Excessive or inadequate use can lead to liver failure.

What Is Happening to My Hair?

Starting to lose hair often starts another journey equally frustrating – the hunt for a product to stop hair loss. Most people accept this as a sign of getting old, but for some, it can have a great impact on their self-esteem, and it can become a source of anxiety and depression.

Typically, for men, the first sign is a recession of the hairline at the temples producing a recognizable M shape. In contrast, women don’t often see their hairline receding, but the most common symptom is generalized hair thinning

Researchers have known for a long time that alopecia has a strong genetic component. In other words, baldness runs in families, which means if one of your parents lost their hair, there is a strong chance you will too!

Back in 1916, researchers believed baldness was caused by a single gene and for the unlucky ones that had it, it meant losing hair was inevitable (1). It turned out it’s a lot more complicated than that, with many genes in the mix and many factors affecting the overall outcome.

The mechanism remained a mystery until the 60s when an American scientist called Norman Orentreich (who also developed the original hair transplant procedures) first used the term androgenetic alopecia to refer to the involvement of a type of hormones called androgens in hair loss. This conclusion that these hormones were somehow involved in hair loss came from the observations that patients with low levels of these hormones do not go bald.

These hormones are often called ‘male hormones,’ but don’t let the name fool you. Although in different amounts, both men and women produce androgens. For the purpose of hair loss, the main androgens involved are testosterone and dihydrotestosterone (we’ll refer to it as DHT from now on).

Probably testis or ovaries would come top of the list if you were to google organs in the body where these hormones are produced, but the reality is that skin and hair follicles are just as capable of androgen synthesis and metabolism (2).

Central in this mechanism is an enzyme called 5-alpha-reductase, which converts testosterone to DHT (3). It may seem at first glance that converting one type of androgen into another would not have a significant impact, but the problem is that DHT is up to five times more active than testosterone (4).

In fact, DHT is the driving force behind androgenic hair loss, converting active and healthy hair follicles into smaller and wrinkled follicles with a short growing period for the hair. 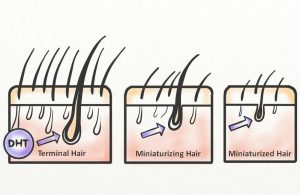 As a consequence of DHT activity, each cycle of hair development becomes more and more compromised. Not only the growth phase (called anagen) gets shorter, but also the quiet phase (called telogen) gets longer.

It’s not uncommon for patients losing their hair to complain of periods of extreme hair shedding during brushing and washing. This can be explained by an increasing proportion of hair follicles in quiet mode. With each cycle, the length of hair is reduced and ultimately growth phase is not even long enough for the hair to come out of the follicle and reach the surface of the skin.

There are different attitudes to losing hair. While some people accept it as a normal part of life, for others, it causes a great deal of stress and they’re keen to try different treatments.

Sadly, treating alopecia is extremely difficult and currently, there are only two approved drugs for the treatment of androgenetic alopecia.

Results with both options can be highly variable, and there have been a few side effects reported, from mild dryness in the scalp to more serious impotence and erectile dysfunction in men. Despite these side effects, both minoxidil and finasteride are popular treatments.

Hair transplantation is another possibility, as well as low-laser therapy and micro needling. Microneedling and laser therapy are both quite effective to treat hair loss.

It’s not surprising then that there is a real need for a novel treatment for hair loss, ideally with minimal side effects. One way to answer this problem is by using natural products.

In fact, in traditional forms of medicine, there are many plants reported to prevent hair loss, and this idea is starting to attract the attention of scientists working in the field. Examples include saw palmetto, pumpkin seeds, liquorice, ginkgo biloba, and rosemary, to name just a few.

One of these natural products that has actually been tested in the lab is green tea. 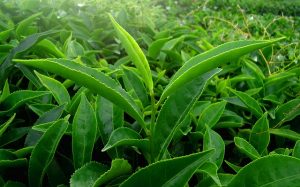 Green tea is a type of tea made from the tea plant (or Camellia sinensis), using leaves and buds that have not gone through the same maturation process as in oolong and black tea (hence the colour green). It’s typically cultivated widely in India, Sri Lanka, China, Indonesia and Japan. For centuries it’s been widely consumed in most parts of Asia and is now becoming more popular in North America and Europe (9, 10).

It turns out it’s more than just a pleasant hot beverage. It contains powerful antioxidants, of which the most important are a group of compounds known as flavonoids. Within this group, a compound called epigallocatechin gallate (or EGCG for short) is the most active in green tea (9, 10).

This compound is known for its anti-cancer effects, protection against DNA damage, and antioxidant and anti-inflammation activities, among other benefits (9, 10).

Finding an Explanation for Green Tea Effect on Hair Loss

When it comes to hair loss, there are several studies showing the beneficial effects of using treatments based on green tea.

Testing natural products is a recent trend and one of the earliest explanations back in 2005 relied simply on the anti-inflammatory properties of green tea, when researchers were able to treat mice with spontaneous hair loss by giving them green tea extracts mixed in the water (11).

About one-third of mice receiving this treatment had significant hair regrowth for six months, whereas the unlucky ones to receive just water showed no hair regrowth in the affected areas.

Combinations with other treatments also seem to work well.

Researchers now have a better understanding of how green tea is helping prevent hair loss. It turns out EGCG works the same way as finasteride. In other words, EGCG can prevent the activity of 5-alpha-reductase (14).

The idea is that by limiting the levels of 5-alpha-reductase, EGCG can limit the enzyme’s damaging effects, including causing havoc in the hair cycle and promoting miniaturization of follicles.

In addition, it came to light more recently that this is not the only weapon in EGCG’s bag! There is some evidence to suggest that EGCG also has a more general effect in terms of promoting cell growth and limit cell death (a process known as apoptosis, 15).

It seems that EGCG can combat DHT’s tendency to increase oxidative stress in the cells by promoting the activity of certain protective genes (16, 17, 18). This includes some involved in cell growth and survival; and blocking others involved in oxidation, apoptosis, and cell death (19).

It’s Not Even Just EGCG, There are Other Compounds Helping to Stop Hair Loss

And EGCG is not even the only flavonoid to have a beneficial effect in hair loss.

For example, a second flavonoid called quercetin has also been used to treat hair loss in mice (20).

Quercetin is an abundant flavonoid found in a variety of foods, including apples, cranberries, green leafy vegetables, seeds, flowers, olive oil, and green tea (21). Like EGCG, quercetin has anti-cancer and anti-inflammatory powers and has shown the potential to treat high blood pressure and neurodegenerative diseases (22).

In terms of hair loss, the authors believe it’s all down to quercetin’s ability to control a protein called heat shock protein 70 (23). If left unchecked, these proteins contribute to the inflammatory response and act as messengers in the body disseminating inflammation even further. In contrast, quercetin is able to reduce levels of this protein and keep it from spreading.

Health Issues to Consider Before Starting Treatment with Green Tea

Despite these promising results using green tea to treat alopecia, there is one very important aspect to take into account if you’re considering one of the many different products currently available on the market.

In the past few years, there’s been an increase in the use of natural products and, because people believe they’re safe, they don’t always follow the recommended doses. Sometimes, it’s the actual product that is formulated incorrectly and can be dangerous for patients using it.

For example, Exolise®, a product for weight loss based on green tea extracts, was withdrawn from the market in 2003 after multiple reports of hepatitis in France and Spain (24).

Products to treat hair loss can be just as dangerous if used incorrectly.

Typically, symptoms start about a month after starting the treatment and commonly include jaundice, joint pain, and liver enlargement. If treated in time, patients recover once they stop using the product and the liver function returns to normal within a few weeks (25). In most cases, this is not a life-threatening condition.  But it’s still crucial to provide accurate safety information for consumers and health providers and establish tight regulations regarding production, marketing claims, and safe doses to use (26).

Despite the several pharmaceutical options to treat alopecia, the use of natural products is attracting much scientific interest.

It all started in 1993, with the first trial to test the effect of a natural product on hair loss. In this case, Ginkgo biloba was a success to treat mice with bald patches (27) The original attempts to understand the effects of green tea came in 2005 and from that moment, the topic has grown steadily over the past 15 years, expanding the range of products tested.

This field is becoming popular mainly due to the problems associated with minoxidil and finasteride, in terms of low efficacy and high rate of side effects. Several studies have now reported beneficial effects of using green tea – either used as a topical application or as a drink – with minimal side effects (if used correctly).

Prompted by these promising results, researchers are now working on developing new treatments based on combinations of two or more different products. The aim is to develop a new treatment that effective, safe, and useful.

Is It Possible to Convert Vellus Hair to Terminal Hair? | A Complete Guide