We know from studies such as this and this that when men lack DHT due to castration in early life they never go bald.

Those same men when later injected with testosterone begin to show early signs of hair loss.

Blocking DHT topically (on the scalp) rather than systematically (throughout the body) reduces your chances of adverse side effects that are associated with DHT blocking because DHT is reduced only in the scalp.

By blocking DHT throughout the body you have a much higher risk of affecting other parts of the body such as our sex organs.

DHT is a natural and normal hormone, so by blocking it we do risk side effects. That’s why it’s lower risk just to block it locally.

Unfortunately though, due to a number of complex reasons (primarily calcification and fibrosis) even the systematic blocking of DHT won’t completely reverse hair loss if it has already taken place. This is why men on high doses of the DHT blocker finasteride rarely regrow much hair at all. (We would expect them to regrow all their hair if DHT was the only factor.)

Since almost everyone uses a shampoo at least once a week, it would make sense to use a shampoo that has some sort of ability to topically reduce DHT with the aim to allow the hairs to grow better.

In theory this makes sense, although in practice blocking DHT topically with the aim to regrow hair is certainly not the most effective way to do so.

Essentially, it may help, however the difference is unlikely to be very obvious.

In this article you’ll learn about the very best options when it comes to topically blocking DHT with a shampoo or other option.

How DHT Affects Your Hair

DHT is made from the naturally-occurring hormone, testosterone. DHT is formed when an enzyme known as 5-alpha-reductase, or 5AR, converts testosterone into di-hydrotestosterone (1).

Lowering testosterone levels to control DHT is not an option. Whether you’re male or female, your body needs a certain amount of testosterone to function properly, and you don’t want to upset the natural balance of your hormone levels (2).

Men and women who suffer from male pattern baldness don’t necessarily have more DHT; instead, they have a sensitivity to it — one that causes their follicles to miniaturize and weaken (3).

So, although one approach to controlling DHT would be to control the amount of 5AR circulating in your body or to slow the action of the enzyme, a better option might be to remove DHT from your scalp altogether.

This can help your hair grow stronger and thicker (4).

There are several ingredients that are known to contribute to the blocking of DHT in hair follicles. At least one of these should be included in any shampoo formula — homemade or store-bought.

Choosing a Shampoo with DHT-Blocking Ingredients

The most important part of using a DHT-blocking shampoo is to choose one that has one or more of the following proven ingredients.

One of the most widely studied essential oils, rosemary oil is a versatile essential oil with proven therapeutic health benefits. In the past, it’s been recorded to act as an:

While all of these properties can contribute to healthy hair growth, the most exciting benefit for hair loss sufferers is rosemary oil’s potential ability to inhibit 5AR.

In 2013, researchers from Japan used mice to show that topical application of Rosmarinus officinalis leaf extract (RO-ext) could be used to induce hair growth (9).

The first part of the study showed that mice previously treated with testosterone, which interrupted hair regrowth, saw improved hair growth once treated with RO-ext 2mg/day.

The researchers took it one step further, though. They also wanted to see whether RO-ext had any anti-androgenetic activity. To do this, they compared various concentrations of the extract to finasteride.

“[t]hese results suggest that [RO-ext] inhibit[s] the binding of dihydrotestosterone to androgen receptors.”

Another study comparing rosemary oil to minoxidil 2% showed that rosemary oil performed as well as the minoxidil on human participants, without causing any side effects (10).

While this study didn’t measure anti-androgenetic effects specifically, it did show that rosemary helped increase hair counts when used topically by men experiencing AGA. And this is why rosemary oil is included in HairGuard’s Shampoo and Elixir.

There’s no doubt that the above study offers some hope for hair loss sufferers looking for a natural approach to hair regrowth. However, do keep in mind that the first study was performed on mice and the second study was short term (six months).

This doesn’t mean that rosemary oil doesn’t work. But it does mean that future studies, especially those on human participants, would be helpful in determining the level of 5AR-inhibiting abilities and how well it can regrow hair in the long term.

Serenoa repens, or saw palmetto, has long been used medicinally by the Seminole Indians of Florida. It is well tolerated by most individuals and appears to have few side effects other than mild headache (11). 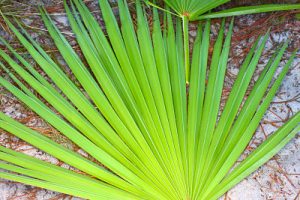 There are several ways that saw palmetto may be useful in minimizing hair loss (12):

Of these abilities, saw palmetto’s 5AR-blocking abilities are the most widely studied (13)(14).

The first study, undertaken in 2012, compared the effectiveness of finasteride to saw palmetto in treating AGA. Although this was a study that concentrated on its oral, not topical, benefits, it still sheds light on saw palmetto’s use as a DHT blocker. (15)

The study consisted of 100 men diagnosed with mild to moderate AGA who were split into two groups.

Global photos were taken at baseline (T0) and the end of the study (T24), and a predetermined scoring index was used to measure change.

Ultimately, 38 of the saw palmetto recipients saw hair growth compared to 68 finasteride users. However, that still amounts to more than half of the participants in the saw palmetto group seeing results.

In 2016, researchers applied saw palmetto to the shaved flank areas of Syrian hamsters along with either DHT or testosterone to determine whether saw palmetto could be helpful in regrowing hair.

The results of this study showed that saw palmetto indirectly blocked DHT by inhibiting 5AR.

The hamsters that received saw palmetto plus testosterone showed reduced pigmentation – a sign of the plant’s androgenic activities – than when it was combined with DHT.

This means that a risk of side effects, particularly gastrointestinal upset and loss of libido, does exist (18).

Should this put you off from using Saw Palmetto? Not necessarily.

One way to lessen the side effects is by using it topically. This may still cause side effects, but these are more likely to be localized to the area of application.

The study was split into two parts. The first used ethanol extracts of the mushroom species which were then added to suspensions containing rat liver and prostate microsomes. This shed light on the percentage of inhibitory activity, as shown in the study.

“[t]he anti-androgenic activity of Ganoderma lucidum is an important biological activity for use with BHP patients.”

This testosterone-inhibiting activity, along with saw palmetto’s ability to inhibit 5AR, has far-ranging implications for men and women with AGA.

The study above is quite interesting in that it shows G. lucidum to be more effective at inhibiting 5AR in a laboratory environment when compared to the other mushroom species. But does this mean it’s effective in humans?

The in-vitro study above does offer a new perspective to researchers. And this is helpful when it comes to planning future studies on the efficacy of G. lucidum in the treatment of hair loss. But do keep in mind that in vitro results don’t always look them same when carried out on human subjects.

Stinging nettle is aptly named for the mild stinging sensations that often preclude people from handling the plant. In addition, however, research on its anti-androgenic effects has proven that it may be a potent topical DHT blocker.

A study of rats with Benign Prostatic Hyperplasia (BPH) treated with stinging nettle was undertaken in 2011 (20). The rats’ prostate weight was measured throughout the study to determine the anti-androgenic effects of the stinging nettle (21).

Since BPH involves the enlargement of the prostate and is believed to be caused by high DHT levels, researchers looked for lowered prostate size to indicate a reduction in DHT and signal anti-androgenic activities (22).

Since stinging nettle successfully reduced rat prostate size, it is potentially useful in the minimizing of DHT on the scalps of men and women suffering from AGA.

This is another natural ingredient that shows promise, but that still requires much in the way of human research.

That’s not to say you shouldn’t use products that contain stinging nettle, but you should proceed with caution to ensure there is no adverse reaction or side effects.

How to Shampoo Properly

It might be tempting to use a DHT-blocking shampoo every day, thinking that it will provide more protection to your follicles, but you would be wrong.

Shampooing every day can strip your hair of natural oils and contribute to dry, flaky scalp and even more oil production. 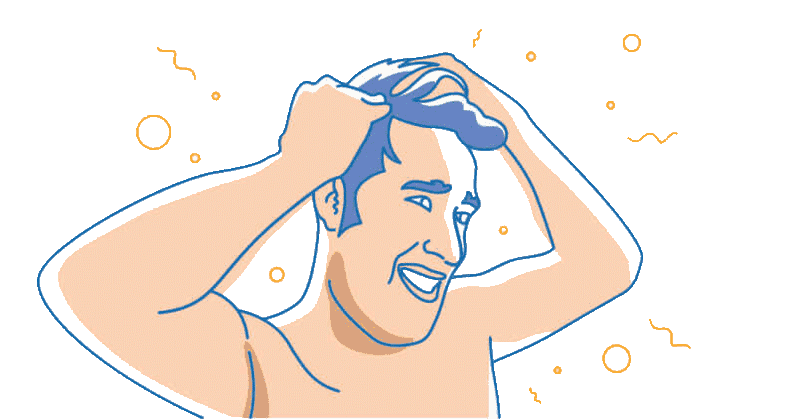 Instead, aim to shampoo twice a week — more after heavy sweating.

Some DHT-blocking shampoos don’t lather a lot — and that’s okay. Just massage them into your scalp and let them sit for a few minutes to let your follicles soak up the formula, then rinse well with warm water.

DHT can have a real impact on the health and strength of your hair.

Over time, shampoos, hair products, natural oils, and environmental pollutants can build up on your scalp, blocking follicles and causing a build-up of DHT-promoting plaque.

DHT-blocking shampoos can be created at home or purchased from a reputable source, though purchased shampoos are likely to have a consistency that’s easier to work with.

Once you’ve chosen your shampoo, make sure you don’t overdo it — washing once or twice a week is plenty. Overwashing can damage hair and scalp and lead to itching, peeling, or oily buildup.

While a DHT-blocking shampoo might not give you a full head of hair on its own, it’s an important part of a sensible hair-regrowth program.